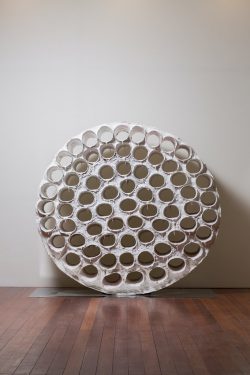 “This is a masterpiece composed of a vertical-type discus made of white china. I am highly impressed by the artist’s remarkable creativity and skill, which have allowed the creation of such delicate yet bold forms. The philosophical sensitivity and figurative tension created through the use of delicate, soft materials make this artwork particularly attractive”

“It is a phenomenon of material and effect. In this piece we are experiencing ceramics as material rather than form. At this scale the materiality is overpowering. As a result this piece sits in tension between a formal raw power and a metaphorically rich-yet-subtle understanding of ceramic materials and histories.

The application and control of the chun glaze on the porcelain body brings us 1000 years back to the Jun kilns of the Henan province.”

“The technique used to make this ceramic piece was obviously very challenging to effect, and the shape is outstanding. The space seen through the numerous holes and light add all the more to the sense of joy of this piece. The shape is of seemingly piled up structure that well shows the texture unique to ceramics. The simple and repeated pattern is impressive. The artist created a new sculpture by creating one huge shape that is a combination of many elements of that shape. The rough yet meticulously calculated method of combining elements imbues this piece with great beauty.

Because it has no colour, Deep Time allows its viewers to concentrate on the shape. The artist gave this work variety by making contrast between the texture of the inside and the outside. Expressed in a simple but grave way, this piece imparts the feeling of seeing a part of nature. Circular elements regularly placed make for a balance within the huge circular piece, in which repetition and variation coexist. The space can be said to be simultaneously divided and connected.”

“Clay moves between science and art, and Deep Time #29 reveals possibilities of this dialogical exchange through clay. The scale of the piece is impressive; a massive form rendered fragile here through process and puncture. Lightening the mass via voids, she shifts geological time into human time, as light and people are visible through the ‘cored’ voids.

The glaze oozes and drips, visceral contrast to the formality of the circles. The circles, in turn, show evidence of their making through rings on the inside, and rough, imperfect edges upon close inspection. The process of slip casting adds material and metaphorical meanings to the piece. Consider the action of the wet clay as it fills the mould, the dry clay shrinking and leaving a record of material transformation from liquid to solid. Atkinson’s use of clay slip and chun glaze is a physical reminder of how viscous lava transforms into volcanic rock, and ice in Antarctica from solid to liquid when core samples remove it from an iceberg.”

Q. Anders Ruhwald I am curious about the use of the Chun glaze in the work. It works extremely well with the overall materiality of the piece, but can you explain why you chose this glaze specifically?

A. Raewyn Atkinson I began using Chun glaze on my sculptural works following my visits to Antarctica in 2000 and 2003. The colour response and tendency to run and pool when applied thickly particularly suited my ideas of conveying the sense of ice melting. It is also a glaze which is responsive to changes in light which is one of the most enduring memories of Antarctica.

I wanted to convey in the work the sense of being under pressure and of a moment frozen in time. I wanted the glaze to mimic melting ice cores and to convey a sense of solidity and fluidity, strength and fragility. Chun is very responsive to atmosphere and temperature during firing. The results are not entirely predictable. By working on such a large scale with challenging material I was exploring the constant struggle between technical control and creative expression.